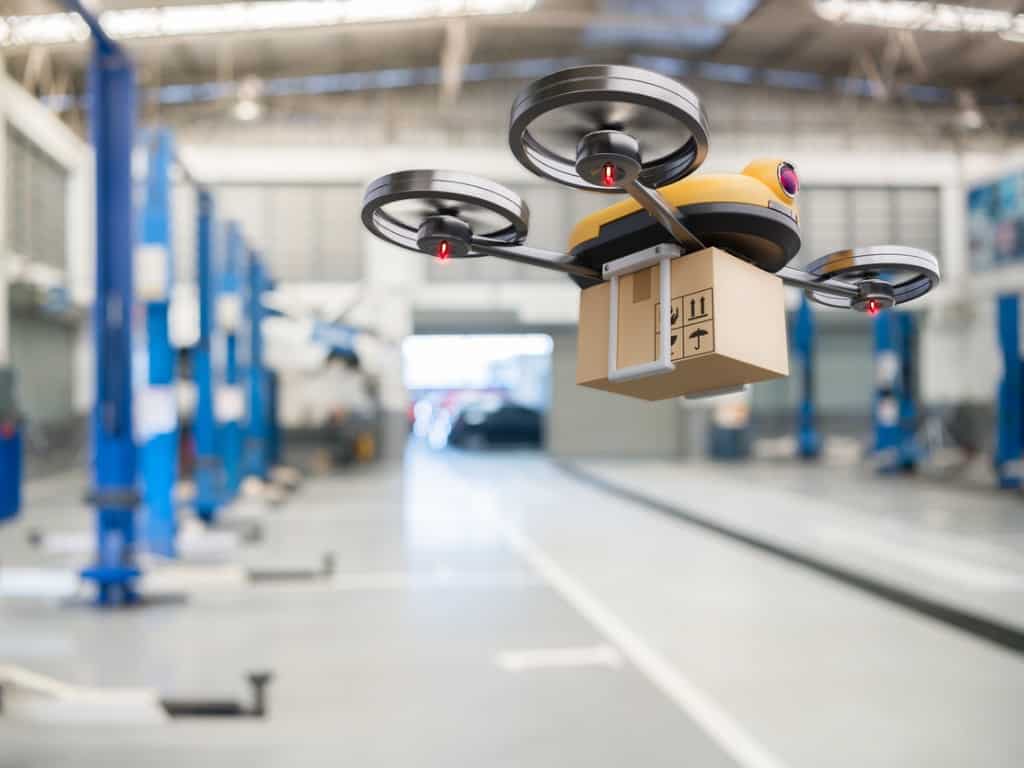 In recent years, several drone delivery companies have started to gain traction in various transportation industries. What started as a passing fad has quickly turned into a legitimate enterprise.

In order to help you understand this new and exciting trend, the team at FreightWaves is here to address the basics of drone deliveries. Below, we’ll answer the common question, “What is drone delivery service?”

We’ll also explain how drone delivery systems work and highlight some of the companies that are already taking advantage of this new technology!

How Does Drone Delivery Work?

Before we dive too deeply into this interesting topic, it is important to answer the question, “How does drone delivery work?” As the name suggests, drone delivery involves the transportation of goods to consumers via the use of unmanned drones.

While drones are not yet advanced enough to economically carry packages long distances, they can still expedite the delivery process. They do this by transporting lightweight products for the final mile of the shipping route.

Drones can be operated in two ways, the first of which is via artificial intelligence (AI). Drones can also be manually operated by pilots who are located at a nearby distribution facility.

Are Drones Being Used for Deliveries?

Yes, drones are actively being used for deliveries. However, they are only being utilized in an extremely limited capacity at this point.

This delivery method is being tested in a few select cities across the globe. Some companies are also using drones for internal deliveries, transporting items from one employee or facility to another.

How Much Does Drone Delivery Cost?

Calculating the exact drone delivery cost can be challenging. Many companies, like Amazon, believe that they will be able to implement drones in a cost-effective manner in the near future.

The goal is to drive the per-unit drone delivery cost to $1 or less per package. This will make package delivery via drones far more affordable than the traditional transportation methods.

Where is Drone Delivery Legal?

Currently, it is perfectly legal to conduct drone deliveries in all 50 states. Unfortunately, companies must navigate various obstacles in order to avoid an accidental violation of these various laws.

This is because many manned aircraft regulations also apply to drones. There is very little legislation that has been created specifically for drones alone.

Why Use Drone Delivery?

Many businesses believe that drone delivery is a more cost-effective means of delivering packages, carry-out food, and other purchases. Instead of sending a single delivery driver to drop off packages at 25 different homes, 25 separate drones could simultaneously transport the items to the places where they need to go.

This means that the packages can be delivered all at once instead of one-by-one. Once perfected, drone delivery will be a much faster and far more efficient method of delivery, allowing some items to be dropped off within an hour of being purchased.

What Companies Use Drone Delivery?

Amazon has been testing its Amazon Prime Air Service in Cambridge, UK. Amazon is attempting to establish a 30-minute turnaround time from the moment an order is placed to the moment it is delivered to the customer. This comes as no surprise because Amazon has been a pioneer in the drone delivery space ever since the technology became mainstream.

How is Drone Delivery Implemented?

Now that you know the answer to the question, “What is drone delivery?” let’s turn our attention to how this exciting technology is being implemented. Drone delivery has several exciting prospective applications in a wide array of industries, including healthcare, food, postal, and shipping.

Drones can be utilized to drop off valuable medical supplies. This includes items such as:

With drones, medical supplies can be flown into remote areas or parts of the world that are inaccessible to humans or airplanes. Dropping off supplies via drones is also a much more affordable option than delivery via airplanes or helicopters.

Drones also have the potential to provide rapid food delivery services. Just imagine ordering a pizza from your local pizzeria and having it delivered via a drone that drops off your pizza as soon as it comes out of the oven! Drone-based food delivery has the potential to be much faster and far more economical than transporting items with a motor vehicle.

Postal companies in multiple countries have already implemented drone delivery trials. These tests are being used to determine whether large-scale postal delivery via drones is feasible. USPS has been testing out drone delivery for a while now.

Drone deliveries can offer tremendous value to the shipping industry. Not only are drones a good option for companies like Amazon, but global logistics firms can also benefit from them. Drones can be used to resupply cargo ships and carry out other tasks that are traditionally performed with small boats.

There are many advantages to drone delivery. Drone delivery can be used to improve public perception, access remote areas quickly, save time, and deliver vital medical supplies, among many other advantageous actions.

The drone industry was initially met with quite a bit of backlash as many people expressed their privacy concerns. However, drone delivery services have quelled many of these concerns. The majority of the general public likes the idea of being able to receive goods quickly, which has caused a shift in public perception.

Drones can access remote or hard-to-reach areas much faster than traditional delivery vehicles. This capability can allow medical staff and aid workers to get people the help they need without the delays they currently experience.

Drones do not rely on congested roadways to transport products to consumers. As a result, they can avoid the traffic jams that current methods of delivery have to put up with, meaning drones can fly right to the buyer’s door and deliver goods with ease.

Another great advantage of drones is that they can be used to deliver medical supplies in non-emergency situations. By using drones, humanitarian groups can transport these supplies without endangering the lives of their volunteers.

While many businesses are ecstatic about the thought of incorporating drone delivery into their business models, this technology does have a few potential drawbacks. These disadvantages include the fact that drones are not yet cost-effective, the battery life is too short, and drones create a privacy risk.

In order to buy a drone that can perform accurate deliveries, companies will need to fork over about $500 per drone. While cheaper drones exist, they are not capable of handling product deliveries as effectively or safely.

As the technology continues to evolve, drones should become more cost-effective. However, conducting drone deliveries on a large scale at this point in time is not a viable solution.

Battery Life is Too Short

The battery life of a delivery drone is about 20 minutes. This is far too brief to be useful for product delivery services. Battery technology must be improved upon before drones can be implemented as a reliable method of delivery.

Despite the fact that the public perception of drones has improved, many people still have concerns about the privacy of drones. Launching a massive drone delivery operation would require organizations to collect even more consumer data. With data breaches becoming an increasingly common occurrence, this could put consumers’ confidential information at an even greater risk.

When you order something from Amazon, it is first shipped to a distribution facility. Once it arrives, the item will be loaded onto a delivery van or truck. The delivery driver will then take the item to your residence. They will also deliver other items with destinations along that same route.

If you were to place that same order via drone delivery, it would still need to be delivered to the distribution facility before arriving at your doorstep. However, instead of being loaded onto a truck and delivered by a trucker, it would be picked up by a drone. The drone would fly directly to your home and drop off your package via air.

Drones do not have to contend with traffic or stop at any other routes along the way. While rapid drone delivery services will likely cost more than traditional options, they will also get items to you a lot faster.

Is Drone Delivery the Future?

Now that we have answered the question, “What is drone delivery?” it is time to look to the future. While drone delivery certainly has a few disadvantages, the benefits vastly outweigh the drawbacks. As a result, drone delivery companies will likely become valued partners with several major industries, including the food, healthcare, postal, and shipping spaces.

If you want to keep up with advancements in the drone delivery and supply chain industries, then check out the FreightWaves e-newsletter subscription! Our experts highlight the latest technological and economic developments in these industries so that you can stay in-the-know at all times.

How to Make Money Using a Load Board

How Dash Cams and Telematics Save Your Business Money

What Is FOB Shipping Point?