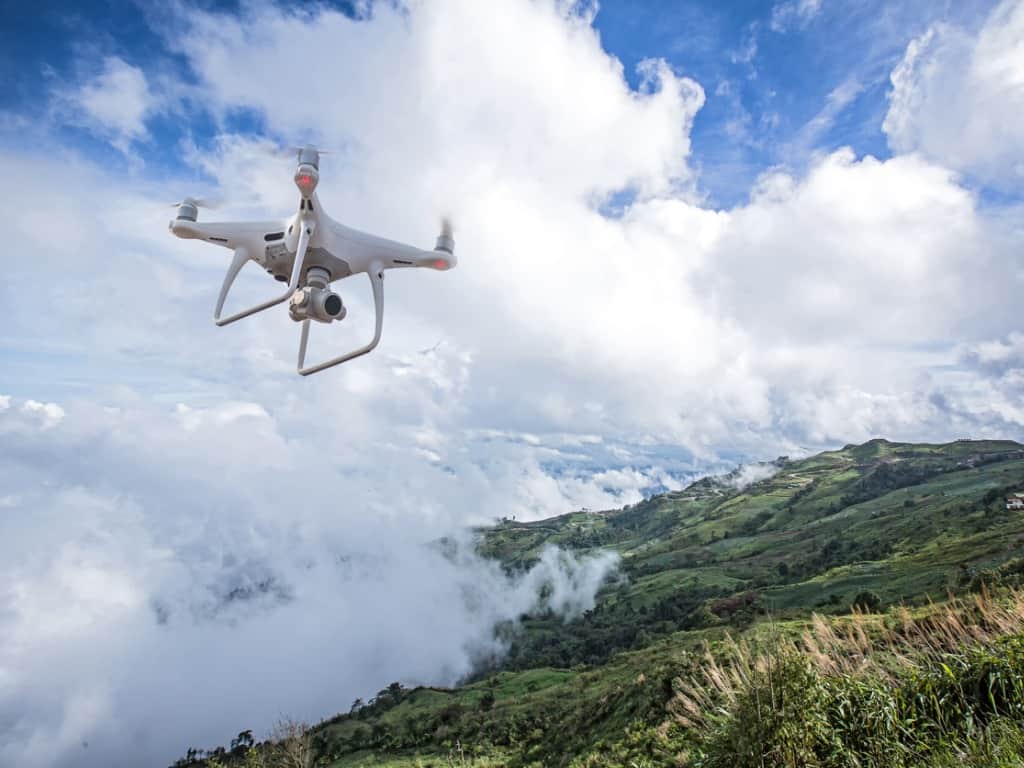 In modern times, drones seem to be on everybody’s mind. From the military use of drones overseas to services that deliver domestic packages with drones, these flying machines have proven their worth. However, many people are still confused by drones and their purpose.

A commercial drone is a quadcopter, octocopter, hexacopter, or other multi-rotor craft that is used for commercial purposes rather than personal or recreational use. Let’s take a look at how drones work, what they are used for, and examples of the various industrial uses of drones.

How Do Commercial Drones Work?

Commercial drones function much like a typical drone that you can personally own. They are equipped with flight control computers and sensors that allow them to hover in place as well as create programmed movements. However, commercial drones are able to do more than just hover or fly back and forth.

Commercial drones are equipped with high-definition thermal cameras that allow the people controlling the drones to view what the drone sees in real-time. Additionally, some drones are able to stay in the air for hours on end and they can even fly hundreds of feet in the air.

Is Commercial Drone Use Legal?

All commercial drones that weigh less than 55 pounds are considered small unmanned aircraft systems (UAS). As such, they are required to be registered with the FAA as well as adhere to all flight restrictions.

What Are the Regulations for Commercial Drone Use?

Commercial drone operators must adhere to fly-by rules, which have been established by the FAA. Fly-by rules include but are not limited to the following mandates.

b) Must not fly higher than 400 feet above ground

c) Cannot be flown over people, stadiums, or prisons

How Much Does a Commercial Drone Cost?

Who Should Use Commercial Drones?

Example of a Commercial Drone

Small businesses can use commercial drones as a way of providing customers with the best possible service. For example, consider a business owner who needs to inspect the roof of a home. An aerial drone can be used to analyze the situation from a bird’s eye view, providing the customer with a clear view of the conditions of the rooftop for a lot less than it would cost to perform manual labor.

There are so many reasons to use commercial drones no matter your industry. Some of the most popular uses of drones include the following:

Commercial drones are an excellent surveillance tool as they can be used to locate evidence and track down criminals in real-time. Additionally, commercial drones can also be implemented by the military for the purpose of conducting aerial surveillance over large areas of land.

In the last few years, commercial drone use in operations has become very popular. For example, thanks to the introduction of drones, demolition companies can get their work done much faster and more effectively.

In the entertainment industry, commercial drones are used for many different purposes. For example, drones make certain breathtaking special effect shots possible in movies and television shows. Drones are also the reason for sweeping aerial views at concerts and large public events around the globe.

Commercial drones can be used to collect data for companies that specialize in emission data collection. These devices can be used to test the quality of the air, water, and soil in different areas around the world.

Online grocery stores and delivery services are turning to commercial drones to complete their deliveries. These unmanned aerial vehicles can be used to deliver packages right to customers’ front doors in a timely manner.

Industries That Use Commercial Drones

You may not realize it, but many industries utilize drones for commercial purposes. Here are some prominent industrial examples!

Commercial drones are extremely beneficial for construction companies because they can be used to take aerial photos and videos of projects during various stages of development.

Commercial drones can fly over the top of properties that are currently being developed so that contractors and developers can see their projects from a higher and more well-rounded perspective.

Delivery services have begun to use commercial drones to deliver packages right to people’s homes. Some delivery services will even drop items off in a person’s backyard or at people’s front doors.

Drone usage within the agriculture industry is very popular. For example, farmers and ranchers use drones to scout out areas that require additional water or sunlight during their crop and animal farming operations.

The transportation industry is using commercial drones to deliver packages right to customers’ front doors. Many different online retailers have started partnering with delivery services that will drop off items in front yards or backyards.

The oil and gas industry is using commercial drones to track their pipelines in order to ensure that they are free of leaks. The unmanned aerial vehicles can also be used to monitor surface conditions at different drilling sites.

Power companies are using commercial drones to monitor their power lines as a way of ensuring that they are safe from any and all potential power glitches. The unmanned aerial vehicles can also be used for dry runs of different power generation projects.

For example, the SolarCity Corporation partnered with NASA to deliver solar panels to customers by way of commercial drones.

Public safety agencies can use commercial drones to monitor emergency sites that are threatened by natural disasters. For example, these unmanned aerial vehicles can be used to survey the site of a wildfire before it happens.

Commercial real estate agents can use commercial drones to capture aerial footage of the homes and the properties that they are trying to sell. This footage can be used in real estate ads or online property listings.

Commercial use is the fastest-growing purpose of drones in the history of drone technology. The companies listed above are not the only ones to take advantage of these unmanned aerial vehicles for business purposes. There are thousands of different companies that use commercial drones for various reasons.

The commercial drone industry provides many perks to drone operators such as increased productivity and reduced production costs. For example, most large companies do not have the funds to hire a helicopter pilot to watch over their sites.

What size drone requires a license?

Commercial drone use only requires a drone license if the operator is using a device that weighs more than 8.8 pounds or 5 kilograms. All other commercial drones are exempt from this requirement.

Who needs an FAA drone license?

Anyone who intends to use a commercial drone for non-personal recreational purposes or to conduct commercial operations needs a drone license.

What does the FAA consider a drone?

The FAA considers a drone to be any kind of powered flying vehicle that is controlled by a pilot. This includes aircraft such as helicopters, airplanes, blimps, dirigibles, or balloons. Unmanned aerial vehicles are also considered to be drones even if they are not being driven or used for commercial purposes.